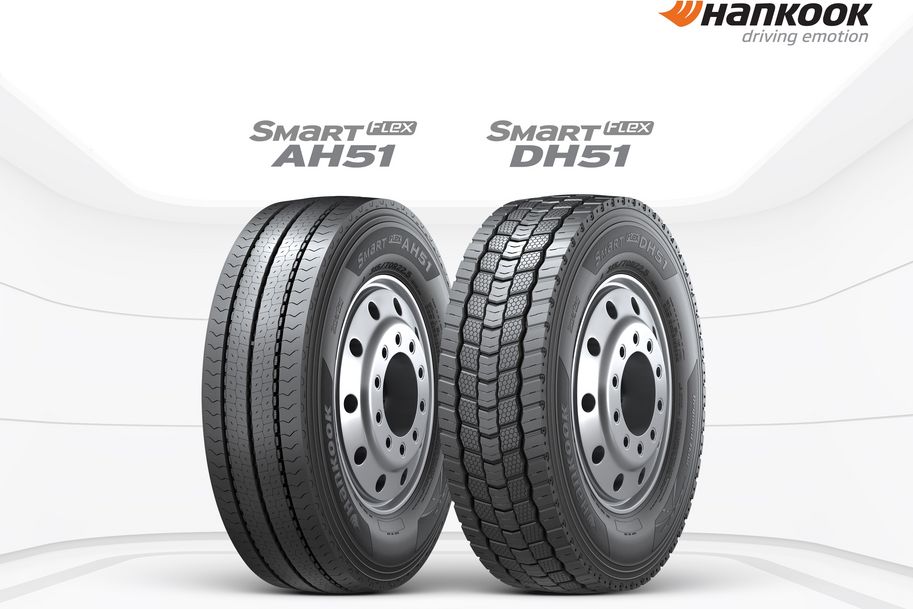 - Debut of several Hankook premium tyre technologies - Significant reduction in rolling resistance and CPK - Improved mileage and wet performance - Self-regenerating treads – performance in all conditions from first to last millimetres of wear - SmartLife technology for up to 250% multiple lives performance Within its successful SmartFlex series, global leading tyre company Hankook has introduced new treads in the truck segment for regional up to long-distance traffic in Europe. The SmartFlex AH51 for the steering axle, and the SmartFlex DH51 for the driving axle, respectively offer 15 and 20 percent better mileage in comparison to the previous models. In addition to numerous other features from the Hankook SmartLife concept, that includes both new tread patterns technologies self-regeneration of tread patterns will be established within the Hankook truck tyre portfolio. The first six dimensions will be available in a selection of European markets starting November 2021.

Neu-Isenburg, Germany, 31st August 2021 - As part of the Hankook truck tyre portfolio, the successful SmartFlex line covers a particularly wide range of applications, ranging from regional to local traffic distributions. The spectrum even extends, to the long-haul transportation and construction site applications, if necessary. In addition, this will all be possible throughout the calendar year thanks to the 3PMSF certification. Premium tyre manufacturer Hankook is now further expanding its tyre portfolio within the successful SmartFlex line with two completely new treads, the SmartFlex AH51 for the steering axle and the SmartFlex DH51 for the driving axle.

Compared to their predecessors, there has been a considerable increase in mileage performance for both new tyre patterns, 15 percent for the steering axle and 20 percent for the driving axle. Moreover, the 10 percent reduction in rolling resistance for the SmartFlex AH51 and DH51 contributes to a further reduction in fuel consumption when compared to the already well performing 31 series tyres. When looking at the CPK indicator (cost per kilometre), which is becoming increasingly important for the entire transportation industry, both new SmartFlex treads are able to support economical fleet operations in an increasingly sustainable manner.

“Hankook truck and bus tyres have long been in the premium category globally and have therefore been used for some time now by many well-known and leading vehicle manufacturers as original equipment worldwide,” says Sanghoon Lee, President of Hankook Tire Europe. “As a company, we place a high value on the sustainability of our products, and therefore our newly developed smart treads fulfil our aspirations for ensuring sustainable and future-proof tyres, and of course also in conjunction with significantly increased customer benefits.”

In the development of both tyres, the company's design engineers used the Hankook SmartLife concept, which particularly focuses on sustainability. The focus here is on the requirement for the products to always offer the highest possible performance from the first to the last millimetre of tread depth. Like all modern Hankook truck tyres, the two new treads can be regrooved thanks to the latest technologies and are of course retreadable. In addition, the Hankook SmartLife Premium casing, in combination with the Hankook Premium retreading, ensures an increase in tyre life of up to 250 percent and thus an even further increase in resource conservation and cost efficiency.
“As a premium tyre maker, the focus of our tyre development is always on premium quality and long service life. In addition, permanent operational safety and achieving the highest possible performance are also decisive criteria,” explains Guy Heywood, Marketing Director Truck & Bus Tyres at Hankook Tire Europe. “Intensive testing has shown that, compared to competitors in the premium category, both new SmartFlex products achieve significantly higher performance standards in the lifetime performance chapter, even when the tyre are 2/3 worn, for example in terms of braking distance on wet roads as well as grip and safety in a wide range of road conditions.”

The base compound of both patterns of AH51 and DH51 was consistently designed for efficiency. The increase in the proportion of low-damping materials contributes significantly to the reduction of principle viscoelastic power loss throughout the tread, therefore less energy is lost, and fuel efficiency is improved. The sidewall compounds were also freshly developed for the new SmartFlex generation. Hankook developers have placed a considerable emphasis on significantly increased resistance to crack formation and material fatigue. Thus, the overall resistance of the SmartLife carcasses used on AH51 and DH51 has been further enhanced compared to the predecessor treads. The new DH51 tyre also has a distinct feature in its notch-tough tread compounds, where special high-performance resins improve the resistance and durability by increasing the molecular weight of the polymers used, thus contributing to an overall higher mileage performance.

The innovative Hankook mixing process IMS (Innovative Mixing System) ensures an even distribution of carbon black particles and rubber molecules within the compounds. In combination with the extension of the mixing times at lowered temperatures, a significant increase in the bonding rate between the carbon black and rubber molecules can thus be achieved. As a result, SmartFlex tyres generate less heat during operation.

The SCCT (Stiffness Control Contour Theory) design technology used in SmartFlex products ensures that the internal pressure distribution is as evenly balanced as possible depending on the application. This results in more stability and less movement in the tyre casing during use, which leads to high durability of the SmartLife carcasses and very good retreadability. For both the belt plies and the carcass itself, the AH51 and DH51 each use special high-strength steel cord materials. Together with the SCCT contour, this results in a consistent contact patch for even wear, as well as improved traction and braking performance.

3D sipes with self-regenerating tread features incorporated into the AH51 and DH51 treads emerge after a degree of wear of between 40 and 70 percent in the tread pattern. The task of these “regenerating” grooves is to lock the tread blocks together in the rolling movement and thus ensure higher overall tread stability and thus resulting in extended mileage over the entire service life. They also make the tyre more robust and less susceptible to external influences, such as poor road surfaces. So-called “hidden grooves” appear from a wear level of around 70 percent and ensure continued high traction and wet grip even in wet conditions until the tread is completely worn out.

The wide tread blocks of the SmartFlex AH51, which can also be used as an all-position tyre, are equipped with additional supports (T.W.E.S. - Tread Wear Equalised Stepper) in the outer grooves and significantly increase the tread stiffness in conjunction with its broad tyre shoulder ribs. They ensure particularly even wear across the entire width of the tyre. This results in further improvements in mileage and rolling resistance. The SmartFlex DH51 has a wider contact patch than its predecessor, which increases traction while improving mileage and rolling resistance. Special sipes on the shoulder blocks, which naturally are under stress on drive axle tyres, help to reduce cracking even during peak loads. In addition, they support tread drainage to further increase traction performance. 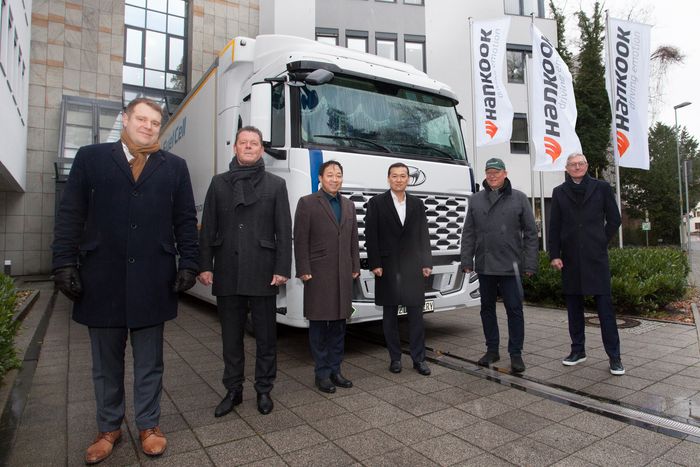 Tyre maker Hankook collaborates with Hyundai on the roadshow about sustainability in logistics organised by H2 Green Power & Logistics. For this purpose, a Hyundai XCIENT Fuel Cell, the vehicle manufacturer’s first... 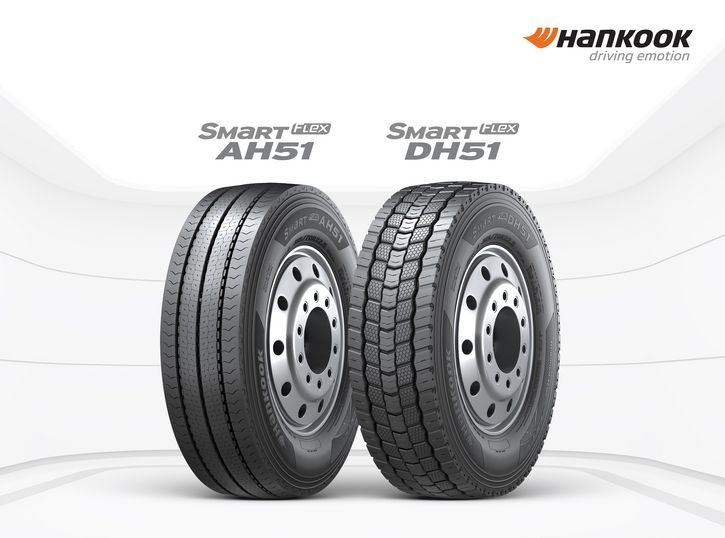