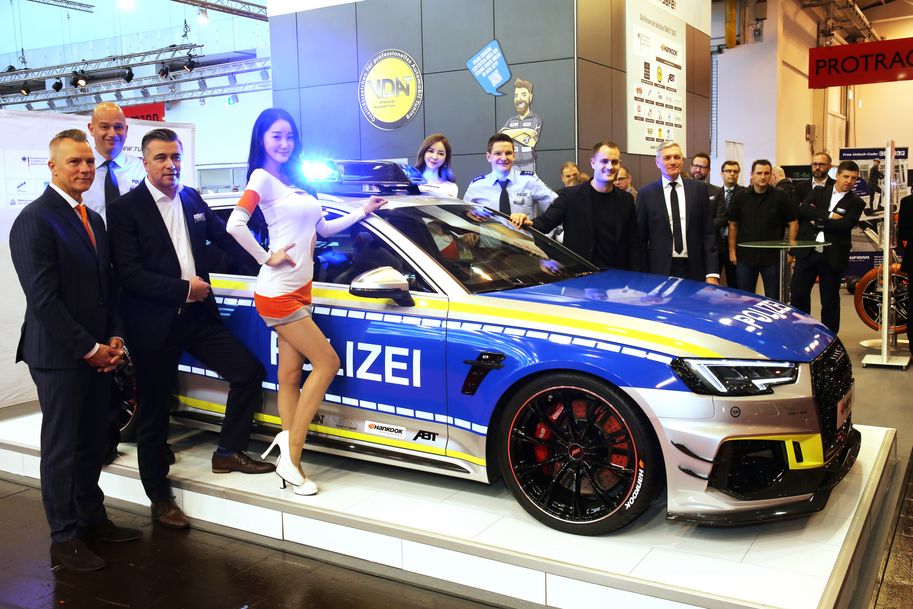 Fast and safe on Hankook tyres – the ABT RS4-R is the new "TUNE IT! SAFE!" campaign vehicle for 2020

On the press day of the Essen Motor Show 2019, the latest campaign vehicle of the TUNE IT! SAFE! Initiative is unveiled in the traditional police car design, supported by the BMVI alongside partner and main sponsor Hankook. The RS4-R, further developed by ABT Sportsline, is based on the recently developed model-maintained Audi RS 4 Avant and rolls into the new decade on the latest ultra-high performance Ventus S1 evo 3 tyres in the 20-inch dimension. The unveiling of the vehicle took place on the press day together with TUNE IT! SAFE! Since 2005, the founding year of the initiative, Hankook has been the exclusive tyre partner for safe and legal tuning.

Essen, Germany, 29 November 2019 – Once again the curtain falls on the Essen Motor Show. Premium tyre maker Hankook and the "TUNE IT! SAFE!" initiative unveiled the new police vehicle of the campaign for safe and legal tuning at the VDAT stand in the presence of Hankook management. Following the BMW i8 Coupé from last year, the upcoming campaign vehicle once again comes from a German manufacturer. The more than 500 HP sports car is equipped with Hankook’s Ventus S1 evo 3 ultra-high performance tyres in size 275/30 ZR20.

"Since 2005, the founding year of TUNE IT! SAFE!, Hankook has been a successful main sponsor and exclusive tyre partner for road safety and tuning. With the Ventus S1 evo 3, the ABT RS4-R has the right ultra-high performance tyres to enter the campaign year 2020 in a sporty yet responsible way," says Roland Hehner, Head of Product and Tuning at Hankook Reifen Deutschland.

The ABT RS4-R impresses with its uncompromising sporty design. The Audi RS 4 Avant with 450 horsepower already has a significant amount of power. In the further developed ABT version, the vehicle has another 80 HP more under the bonnet, which allows it to accelerate from 0 to 100 km/h in 3.8 seconds. For the tuning community, ABT has also implemented optimised aerodynamics, sports rims, exhaust and chassis technology and an interior in RS4-R design especially for the campaign vehicle.

The tyre is always at the top of the tuning list, which is why Hankook, as a tyre maker, has been particularly interested in the initiative since the beginning of the TUNE IT! SAFE! campaign, which starts with a tuned police car for the 15th time. Launched in spring 2019, the Hankook Ventus S1 evo 3 is a completely new development that systematically continues the success story of Hankook ultra-high performance tyres. The tyre has increased sidewall strength thanks to bead packing, the use of a special nylon material in the sidewall area. The blocks of the stiff and extra wide outer rib of the asymmetric tread pattern have been further reinforced with additional connecting bars for precise and stable cornering handling.

In the Auto Bild summer tyre test 2019, the tyre immediately achieved a top position among 53 brands. Like its predecessors, it offers a very safe, sporty and comfortable driving experience in both dry and wet conditions. Consequently, the new Ventus S1 evo 3 outperformed all other tyres tested, including during wet braking, which was probably the most significant test criterion from a safety point of view. However, the ABT RS4-R was not the only vehicle fitted with Hankook tyres at the Essen Motor Show. The company had already equipped two different Audi RS models with the predecessor Ventus S1 evo 2. The new Ventus S1 evo 3 SUV has also been successful in its SUV version on the Audi Q8 and Porsche Cayenne as original equipment this year. 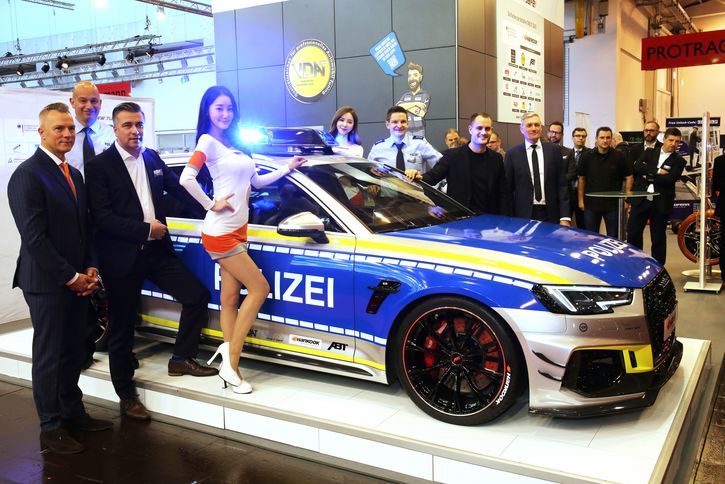 Hankook and the "TUNE IT! SAFE!" initiative unveiled the new police vehicle of the campaign for safe and legal tuning at the VDAT stand in the presence of Hankook management.